Four thousand years ago, give or take, the Babylonian people celebrated a twelve-day festival called Akitu. I don’t know if it involved giving their true loves a bunch of gold rings, some milking maids, and an alarming number of birds, but it was a pretty big deal. Akitu was celebrated in mid-March and it marked the beginning of a new planting season, the beginning of a new year. 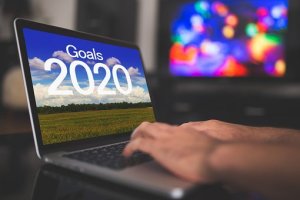 It was the time when Babylonians decided to make some changes. They either reaffirmed their loyalty to their current ruler or got themselves a new one. And on a more personal level, they made vows to their gods to settle their debts, return what had been borrowed, and basically be better people. Though this particular practice doesn’t seem to be included in the histories we have, I think it’s also safe to assume most wanted to shed a few pounds and do a bit less drinking in the new year.

The Babylonians left us the earliest recorded evidence of New Year resolutions, but of course the practice, or some version of it, rose up all over the world. People seem to be hardwired to like a fresh start, a chance to do a little bit better the next time.

I’m not a big resolution-maker. Or at least not specifically at the start of the year. January, for me, has instead become a month of recovery. The Christmas season sort of wipes me out, and this one was worse than most.

I think it all started when Thanksgiving was such a late arrival. Everything felt condensed this season, with all the parties and traditions and fun crammed into a drawer that didn’t have quite enough space. Real life took a backburner while gifts were given and merriment was made. In the midst of that, a tragedy in my extended family zapped whatever I might have had left.

And so, a lot didn’t get done. I didn’t read the wonderful words of all my pals in the blogosphere. I didn’t write many either, not in this space nor elsewhere, and yes, that includes a Christmas letter that now will have to become a greeting for the new year instead.

If you sent me an email in the last few weeks, I most likely didn’t open it, but it’s still waiting in my inbox and I’ll get there soon. If I agreed to read your book or play or short story, I’ll get to that, too. Fortunately, January is long and bleak in my corner of the world and there’s a little more space in the drawer.

It would be great if in 2020 I could lose a little weight and be a little more organized. I’d also still love to learn to teleport. But I think it might be more of a Babylonian New Year for me this year. I’m going to work on settling my debts by catching up on all the things I’ve let slide. By mid-March, I think I just might make it.

Sarah Angleton is a wife, mom, blogger, book nerd, history buff, and author. Her books include Launching Sheep & Other Stories from the Intersection of History and Nonsense and Gentleman of Misfortune.