I don’t know about you, but all this social distancing and isolation has given me a bit of wanderlust. It’s unclear at this point when we might be able to incorporate travel into our lives again, but there’s no question in my mind where I would go if I could.

As soon as it becomes safe and possible, you’ll find me on a plane headed for the Indian Ocean, to a pair of small islands northeast of Sri Lanka. In fact, as travel to the nation of San Seriffe isn’t currently restricted, I might find a way to leave even sooner.

It’s a great little place, consisting of the curvy southern island of Lower Caisse, and to the north the circular Upper Caisse which features the beautiful white sand Cocobanana Beach along its west coast. Home to about 1.8 million people of European and native Flong decent, San Seriffe possesses a rich cultural history dating all the way back to 1977 when it was dreamt into existence by Philip Davies, director of Special Reports for the Guardian newspaper.

Davies was thinking of the frequent special reports in the Financial Times, that highlighted the attributes of small countries he’d almost never heard of, when the idea for an over-the-top April Fool’s prank came to him. He pitched his imaginary island nation to regular staff members Geoffrey Taylor, Stuart St. Clair Legge, Mark Arnold-Forster, and Tim Radford.

The single-page joke feature rapidly expanded into a seven-page supplement that included articles about economic opportunities, political history, and the rapidly growing tourism industry in San Seriffe. The J Walter Thompson Ad Agency even sold ad space, which included a contest sponsored by Kodak requesting snapshots from trips to the islands and with a submission cutoff one day before the piece ran.

What was no more than an elaborate joke filled with puns that prior to the presence of desktop publishing software in most homes, weren’t very familiar outside the publishing industry, became a news-worthy story as readers flooded the newspaper’s office with calls for more information.

The report took on a life of its own then when more astute readers began sending in recollections of trips taken to the fictitious islands. The Guardian published an angry letter to the editor in which a member of the San Serriffe Liberation Front expressed concern about the paper’s clear pro-government bias. Real complaints came from travel agents and airlines, which had a hard time convincing people there was no such place.

It was a fairly perfect April Fool’s prank—one that captured readers’ imaginations and spawned an entire genre of jokes, including “I’ve Been to San Serriffe” bumper stickers, a joke article on WikiTravel, and several books, including The Most Inferior Execution Known Since the Dawn of the Art of Marbeling Collected by the Author During a Five Year Expedition to the Republic of San Serriffe written by Theodore Bachaus and probably available from a library near you.

This year April Fool’s Day came and went with less frivolity. The world in 2020 is a little more scared, a little more serious, and a lot more sensitive about invented news. As much as I suspect we’d all love to call up a travel agent that’s now working from home, and book what would likely be a very inexpensive flight to San Serriffe, doing so is even less possible than it was in 1977.

But like the duped readers of the Guardian all those years ago, we can imagine. We can change our Zoom backdrops and pretend to attend meetings from somewhere on an island beach. Hopefully we can still laugh and appreciate a good joke, even while many of us are feeling scared and trapped. And we can dream of the trips we might take when this strange season of social distancing and travel restrictions is finally over, when we’re free once again to enjoy a beautiful day relaxing on Cocobanana Beach. 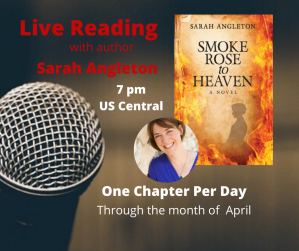 Don’t forget, it’s still a great time to pick up a book and transport yourself to new fictional worlds! If you want, you can join me on my Facebook page where through the month of April, I will be livestreaming my newest historical novel, Smoke Rose to Heaven, one chapter each evening at 7 pm Central US time read by me. Previously read chapters are available for catching up.

11 thoughts on “My Immediate Travel Plans”